Englewood’s Day of Service offers help to residents in need

About 50 volunteers work on projects at five homes

This item is available in full to subscribers.

Our print publications are advertiser supported. For those wishing to access our content online, we have implemented a small charge so we may continue to provide our valued readers and community with unique, high quality local content. Thank you for supporting your local newspaper.

Englewood’s Day of Service offers help to residents in need

About 50 volunteers work on projects at five homes

About 50 volunteers cheered, "I'm a tool," at the start of Englewood's Day of Service event on June 18, 2022. The volunteers first met at Rotolo Park before dispersing to their assigned volunteer projects.
By Tayler Shaw
Posted Tuesday, June 21, 2022 3:29 pm
Behind the “Be a Tool” Phrase

A fair amount of volunteers for the day of service do not have many home repair skills, Bramlett said. However, these people are still able to help with jobs like painting, pulling weeds and other important tasks.

“What's really lovely is that even people that don't necessarily bring a lot of hard-core skills to the table are still volunteering their time. And so if you don't know how to use a tool, then you, yourself, can be the tool,” Bramlett said.

After Virginia Keller had to get a metal rod placed in her right leg following a bad fall in 2016, moving around and doing yard work became more difficult. Her backyard became like a jungle, she said, and her front walkway needed replacing. Thankfully, help arrived June 18 during Englewood’s Day of Service, as volunteers gathered to assist community members like 79-year-old Keller.

“It is just marvelous that people will volunteer and help the older people,” Keller said. “A lot of people could benefit from helping each other, even just next-door neighbors.”

Englewood’s annual day of service, also referred to as the“Be a Tool" service event, began in 2016 after a coalition of churches met with the city manager and decided to host an annual day of service in collaboration with the nonprofit Neighborhood Rehab Project, said Joe Anderson, the lead coordinator in Englewood for the Neighborhood Rehab Project and the city council member representing District 3 in Englewood.

“The goal, as set down by the nonprofit which originated in Golden, was to assist low-income and elderly homeowners with their safe, warm, dry needs, primarily,” said Ryan Bramlett, a coordinator in Englewood for the Neighborhood Rehab Project, explaining that most projects are outdoor home repairs and maintenance work.

Keller’s home was one of five projects for the day. A group of about 50 volunteers arrived early June 18 at Englewood’s Rotolo Park and were split among the five projects, all located near the park. 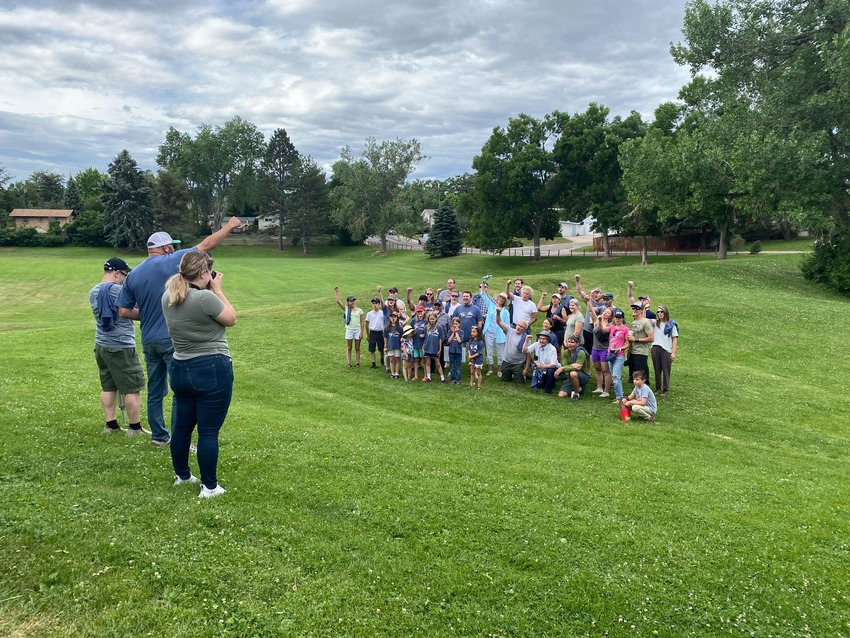 Before heading out to their projects for the day, about 50 volunteers gathered for a group photo for Englewood's Day of Service on June 18, 2022, at Rotolo Park. 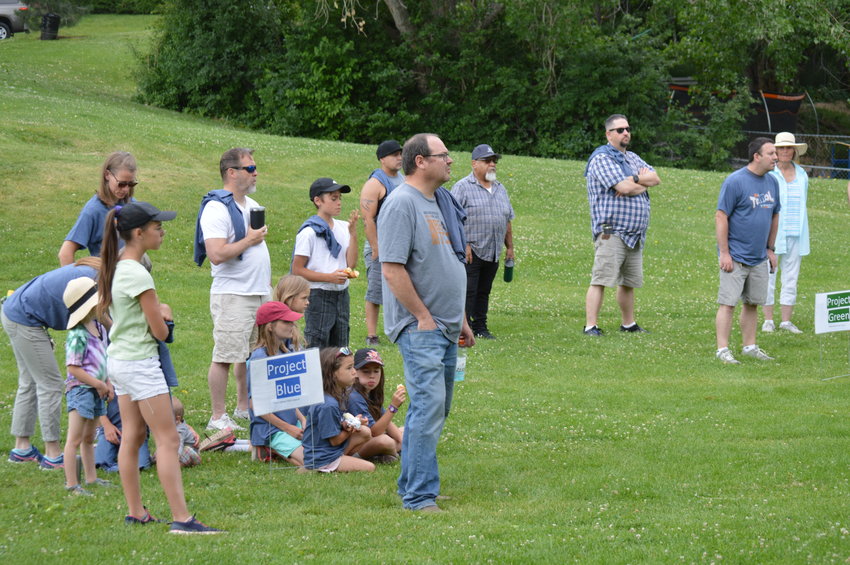 Volunteers were assigned to work on one of five homes near Rotolo Park in Englewood as part of the day of service on June 18, 2022. Each home was given a project color, such as "Project Blue" and "Project Green." 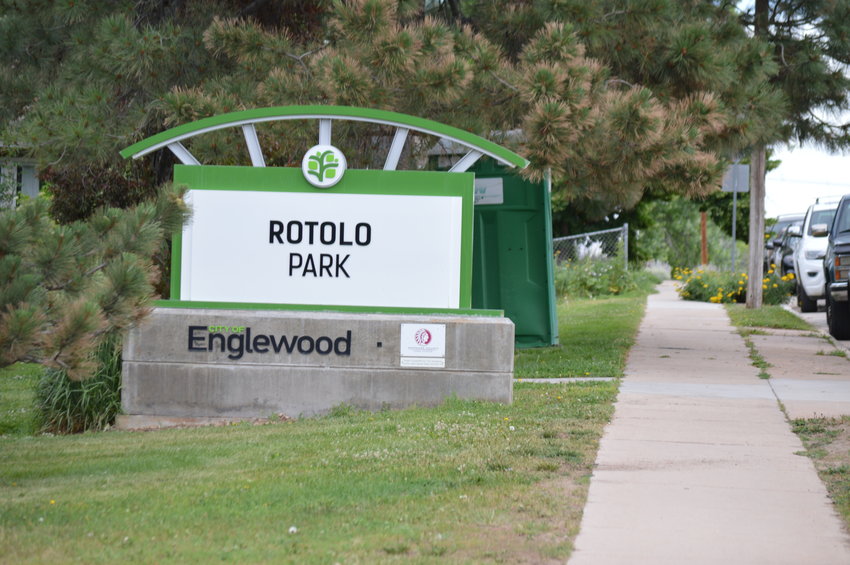 Englewood's Day of Service began at Rotolo Park in Englewood on Saturday, June 18, 2022. 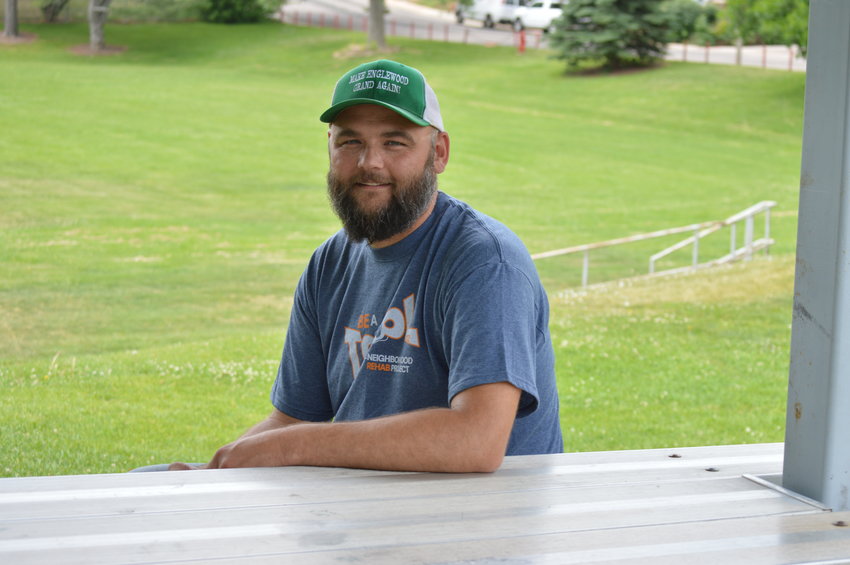 Joe Anderson at Rotolo Park on June 18, 2022. Anderson is the lead coordinator in Englewood for the Neighborhood Rehab Project and a city council member of District 3 in Englewood. 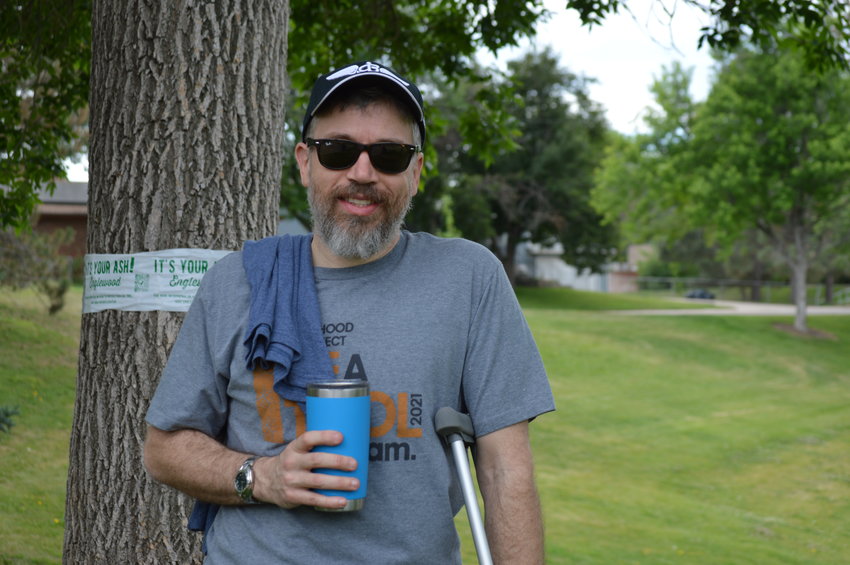 Ryan Bramlett, a coordinator in Englewood for the Neighborhood Rehab Project, at Rotolo Park on June 18, 2022.
Previous Next

“I think the purpose is to get neighbors connected with their neighbors,” Anderson said about the day. “It's got a real collaborative purpose, and so we have had businesses, churches, nonprofits and the city government all involved in this since it started in 2016.”

Keller met Anderson through attending church, she said, and this year was the second time she got assistance through the day of service. During the first experience, which was two or three years ago, she had asked for her front walkway to be replaced, Anderson said, but they weren’t able to get to it. This year, it was one of the main priorities, in addition to working on removing overgrown weeds in the backyard.

“It’s just wonderful to see what gets changed and transformed, and appreciate it,” Keller said. “I’ve always enjoyed Englewood’s community of people. They seem to care about each other.”

Keller first moved into her Englewood home when she was a child in 1946. She moved out in 1964, only to return to it in 2005. Her daughter, Marva Jolly, was among the volunteers working to remove weeds in the backyard.

“This is great,” said Jolly, who lived in Englewood for about 28 years and has volunteered for the day of service event in years past. “If we all just pitch in a little bit here and there — makes it a lot easier for everybody.” 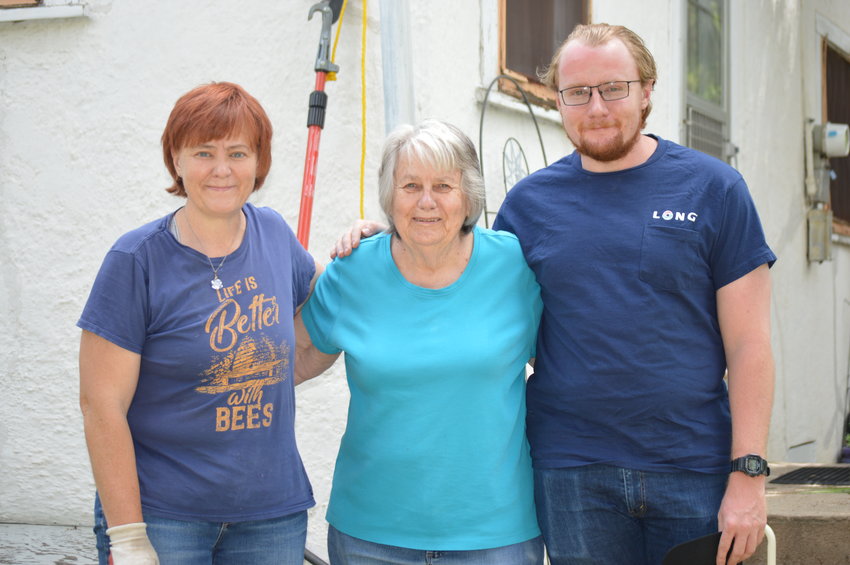 Virginia Keller poses with her daughter, Marva Jolly, left, and her grandson, Jacob Jolly, right, at her home on June 18, 2022. 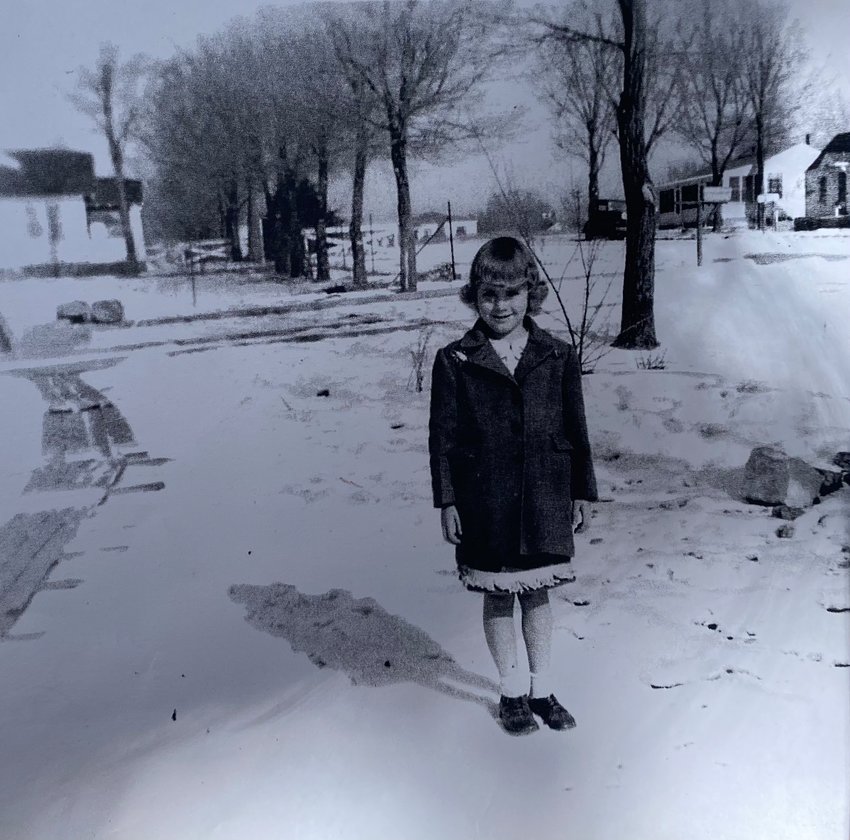 During the day of service event on June 18, 2022, Virginia Keller showed a copy of an image taken of her in about 1950. She was standing in the front yard of her current home in Englewood. There were a lot of elm trees at the time, she said, and the sidewalks were wooden planks. 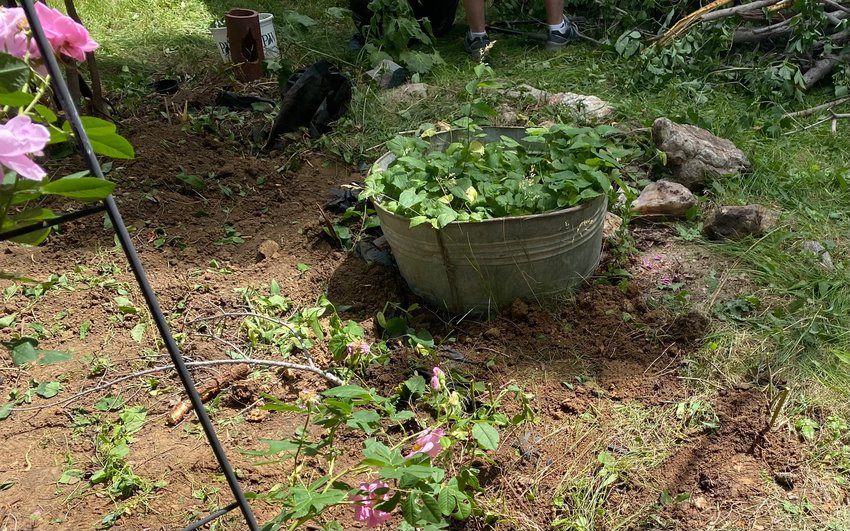 This bucket in Virginia Keller's backyard was one her family's old bathtubs, she said. Her home, which her family first moved into in 1946, did not get water inside the house until 1952, she said, so her and her mom would have to get buckets of water elsewhere to bring back home.
Previous Next

Bev Maes, an Englewood resident who has lived in the area since she was about 12, found out about the day of service through the Nextdoor social-media platform. She said it’s the perfect opportunity for people to jump in and help others.

“I think, to give people something to give themselves to is really important,” Maes said. “You get the reward of, ‘I feel like I helped make my city a better place to live.’”

Maes was assigned to the home of Kayleen Nichols, a 77-year-old woman whose husband, Edd, recently passed away in April.

Some of the tasks at Nichols’ house included scraping off the old paint on her shed to prepare it for new paint, installing a shed door and pulling weeds.

Nichols didn’t expect to have her home be one of the projects for the service day. In fact, when she saw a flyer on her door about the upcoming event, she had asked Anderson, whom she knew through her son, if the event needed donations.

Knowing Nichols has had a rough year, Anderson asked her if she needed things done at her home. Nichols realized some things that did need to be repaired, and she was added to the list.

“You look at something broken for so long, you don’t see it anymore,” Nichols said about realizing problems on her property. When asked how it felt to have volunteers working in her yard, she said, “It’s really exciting.” 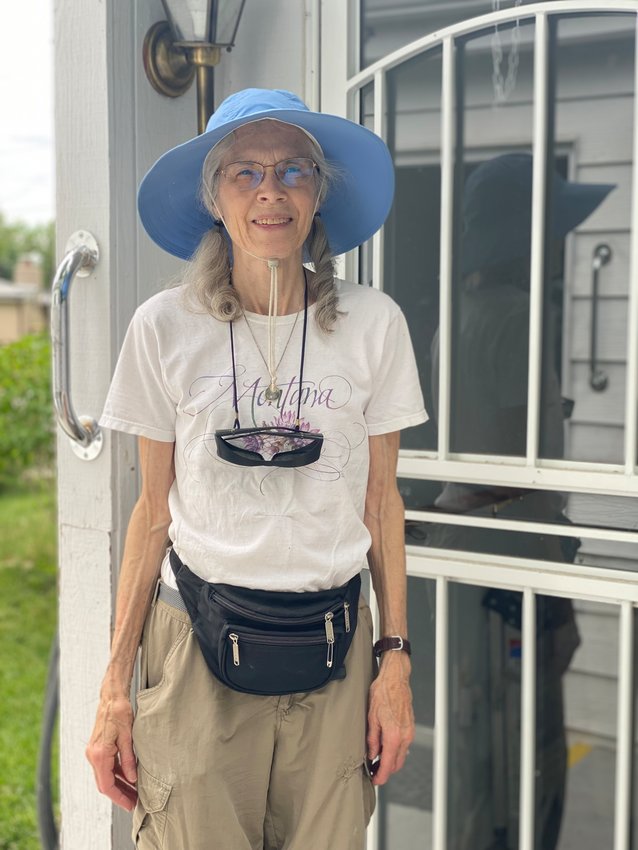 Englewood resident Kayleen Nichols, 77, at her home, which was one of the projects for Englewood's Day of Service on June 18, 2022. 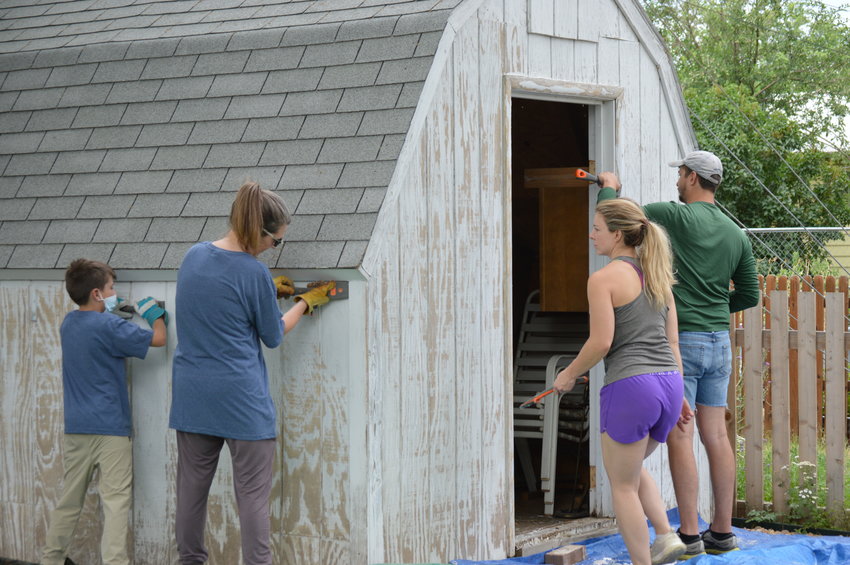 Volunteers worked on scraping old paint off of Kayleen Nichols' shed in her backyard as part of Englewood's Day of Service on June 18, 2022. 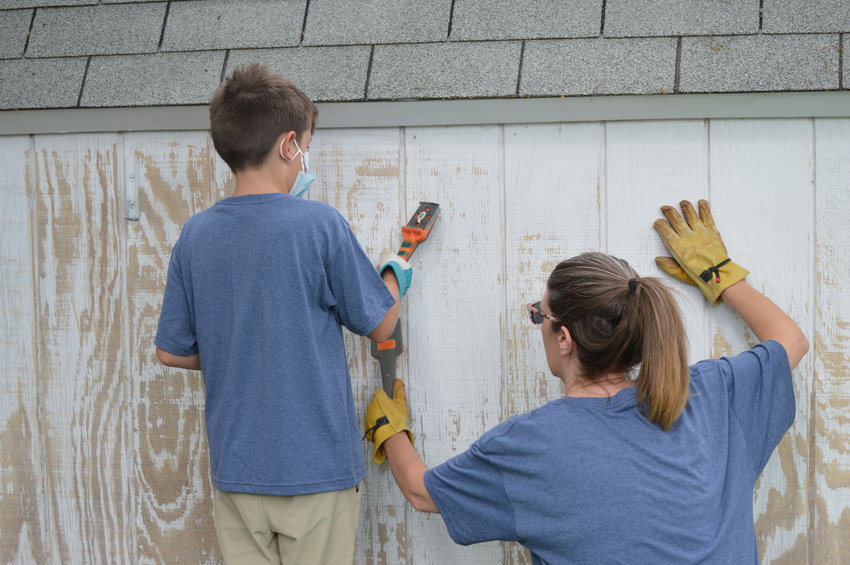 Christine Hart, an accountant for the City of Englewood, and her 10-year-old son, Liam Bibby, were among the volunteers at Kayleen Nichols' home on June 18, 2022. "As an Englewood employee, I just think it's important to be out here and support the community. And it's a good lesson for him," Hart said. 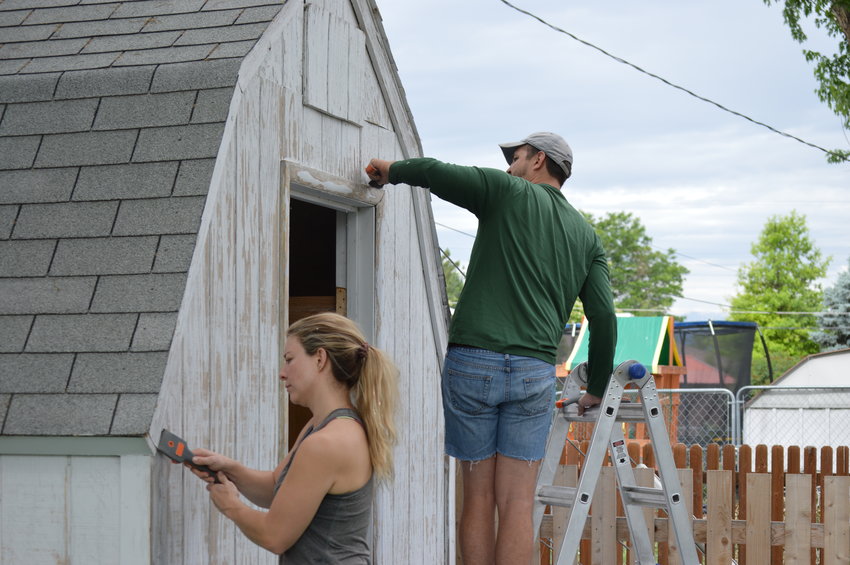 Englewood residents Kayla Kutter and Paul Tesarek worked on scraping old paint from Kayleen Nichols' backyard shed on June 18, 2022. Kutter said these types of events are important because they help connect neighbors and reduce polarization, as well as give residents a better sense of pride for their community. Shawn Lewis, Englewood's city manager, and Logan Dunning, a member of the Englewood Urban Renewal Authority, worked on preparing Kayleen Nichols' new door for her shed on June 18, 2022.
Previous Next

Nichols was with her husband for nearly 54 years, she said. Edd was a teacher for about 22 years at a Christian school, primarily teaching Bible and history to middle school students. One of her favorite memories of Edd was watching him teach during the camping field trips he’d take students on.

“To watch him interact with the kids, it was just — it was wonderful, and he just loved it,” Nichols said.

In 2018, Edd was diagnosed with Parkinson’s disease, Nichols said, though she suspects he had it years before his official diagnosis.

“He passed the Wednesday before Easter,” Nichols said. “He’s in heaven.”

Faith was a connector of numerous volunteers to the day of service. Charles Wooldridge, a painter and sculptor, heard about the volunteer opportunity from Anderson, who is in his men’s Bible study group. Joshua Regan, a locksmith, got involved in the day of service through his church, Sanctuary Christian Fellowship.

Other volunteers, like Casey Davis, heard about the event through the city. Davis, who had been searching for volunteer opportunities to help the community, learned about the day of service through the city newsletter. Wooldridge, Regan and Davis all worked together, along with the help of others, to remove Virginia Keller’s front walkway and pave the way for a new one. Joshua Regan, left, and Charles Wooldridge, right, worked on replacing the old front walkway at the home of Virginia Keller, center, during Englewood's Day of Service on June 18, 2022. Pieces of Virginia Keller's old front walkway were removed by volunteers on June 18, 2022, and placed in the back of a truck.
Previous Next

At the end of the day, Anderson said he hopes that the volunteers gained a sense of connection to the Englewood community and the joy of giving back.

“I think a community can be measured by how much they value the people who are the most in need, and we help elderly, low-income and disabled homeowners,” he said. “We want to lift the people who on the bottom up as much as we can. And I think that really transforms not just the people who volunteer, but the community as [a] whole.”

Englewood’s next day of service will be Sept. 10. Those interested in volunteering or nominating a home to be worked on can find more information at: bit.ly/EnglewoodResources.